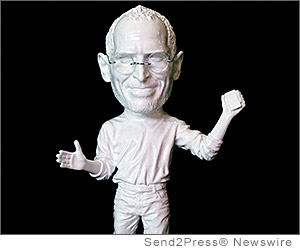 “Think Different” a sculpture of Steve Jobs dressed in his traditional turtleneck and Levi’s jeans attire, with iPhone 5 presented in hand, was fabricated from M.I.C. Gadget’s Steve Jobs action figure that was discontinued after legal threats from Apple’s lawyers in 2010. In 2012, China’s toy manufacturer, In Icon, experienced the same pressure from Apple’s lawyers, canceling the production of their Steve Jobs action figure, as well.

“The production of this sculpture will continue with or without Apple’s approval,” said Cory Allen.

Coated in an “Apple White finish,” the sculpture is cast in the artist’s patented plastic porcelain, mixed with a recycled resin made up of Steve Job’s residential trash which the artist collected from the tech icon’s home several months before his death last year.

“The ‘Jobs’ sculpture represents the pros and cons in pursing the quality of life,” said Cory Allen. “Unfortunately, there are adverse effects bestowed on a global population when supporting a vision.”

Inspired by Steve Jobs’ Einstein-like achievements to ‘Think Different’ and the recent riot at Apple’s Taiwanese electronics manufacturer Foxconn; whose been known for their inhumane labor issues that has resulted in a growing number of suicidal deaths, the artist created the sleek sculpture to be mass produced in an appropriate work environment, encouraging Apple to impose the same standards on Foxconn or to completely disconnect their working relationship.

“Either waiting in line or in an assembly line, Apple is to die for,” said XVALA. “Unfortunately, Apple thinks it’s all the same.”

A limited edition series coated in Apple Black will serve as a motif for the past suicides at the Foxconn factories that continue to grow.

“It’s easy to agree to the end-user license agreement,” said XVALA. “But harder to take the time to read what agreement all entails.”

“Think Different” will debut at AIS Editions on October 13, 2012 at 8 p.m. in the Brewery Arts Complex at 642 Moulton Ave in Los Angeles, Calif.

NEWS SOURCE: Cory Allen Contemporary Art :: This press release was issued on behalf of the news source by Send2Press(R) Newswire, a service of Neotrope(R). View all current news at the Send2Press for Journalists Portal: http://Send2PressNewswire.com/ .

Now’s the Time to Create ‘Highly-Human’ Jobs by the Millions, According to Special Report from EraNova Institute
Diogenes Research Announces Release of New Book ‘The Chinese Origin of the Age of Discovery’