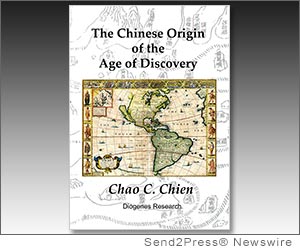 Did the Chinese precede Christopher Columbus in discovering America? The question now has been settled once and for all. Not only were the Chinese first in having visited the American continents, they mapped the world before the Europeans. Indeed, Europeans went to sea because of having learned the geography of the world from the Chinese, and Columbus set sail on account of Chinese sailing guides, and it is virtually certain that Marco Polo never set foot in China.

The evidence in support of such conclusions has now been documented in the new book “The Chinese Origin of the Age of Discovery” (ISBN: 978-1-62141-693-7. Translated Chinese version in traditional Chinese characters, ISBN: 978-1-62141-765-1. Both published through Booklocker.com). Veteran Researcher Chao C. Chien has meticulously collected and analyzed the records preserved from that historical period and the results are conclusive.

In the thirteenth century the Mongols, steppes horsemen that had never seen the ocean, were on tract to conquer the world. After subjugating China, they used their Chinese subjects who had the seafaring knowhow to help chart the globe back in the thirteenth and fourteenth centuries.

In the fourteenth century, after toppling the Mongol Yuan Dynasty, the Ming Chinese the advanced naval technology inherited from the Yuan and the newly gained geographical knowledge to launch an unprecedented naval exercise – with fleets carrying upwards of tens of thousands of sailors under the command of the legendary Admiral Zheng He (previously transliterated into English as Cheng Ho) – that lasted twenty seven years.

This colossal effort brought awareness of unknown lands to the outside world and the Chinese knowledge of the world passed on to the Europeans, fascinating them and inspiring them to go to sea. When the Ming Chinese terminated the enterprise and withdrew from the oceans the Europeans found themselves unopposed in their worldwide expansion, and descriptions of the intriguing place called China found their way into later editions of Marco Polo’s travelogue.

The book is over 300 pages long and contains over 300 illustrations presenting the support material to this extraordinary study of world history which has eluded scholars but preserved in European archives all along.

NEWS SOURCE: Diogenes Research :: This press release was issued on behalf of the news source by Send2Press(R) Newswire, a service of Neotrope(R). View all current news at the Send2Press for Journalists Portal: http://Send2PressNewswire.com/ .