You are here: Home › Halloween Songs for Kids Can Tickle the Funny Bone of the Whole Family
By Send2Press Newswire on September 28, 2012 in California, Family, Parenting and Children, LOS ANGELES, Calif., Music and Recording Industry, U.S. Newswire Stories, Videos 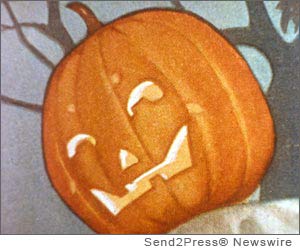 LOS ANGELES, Calif. (SEND2PRESS NEWSWIRE) — For kids of all ages, Halloween is a spooktacular time of year and parents can easily create hours of good safe entertainment with the album called “Halloween Songs That Tickle Your Funny Bone.” From the pen of songwriter Ruth Roberts, the collection is available on both iTunes and Amazon.

“The album is filled with sing-along songs that generations of youngsters grew up with,” states Susan Nicoletti, Director of Operations for Goldenrod Music, the publishing company that oversees Roberts’ songs. “Not only are these numbers tons of fun, they are also kid friendly,” Nicoletti added, and she knows G-rated material when she sees it based on her five years on the Motion Picture Assn. of America ratings board.

“Along with her work for legendary kids TV personality Capt. Kangaroo, Ruth Roberts was one of the most consistently successful songwriters from the 1940s through the 1990s,” Nicoletti states.

For example, Roberts created songs known to every sports fan, including “Meet the Mets,” “It’s a Beautiful Day for a Ball Game,” and “Mr. Touchdown, USA.” In addition, Beatles fans probably know the Fab Four recorded “Mailman Bring Me No More Blues,” which appears on the “Anthology 3” album. Written by the hip-before-her-time Roberts, the tune was also recorded by Buddy Holly, Oliver Nelson, and Lefty Frizzell.

Influenced by Broadway shows she saw as a teen-ager, Roberts also wrote full-length and elementary school mini-musicals which appeal to the “Glee” fan in everyone. Teachers and educators can discover more about her musicals written for a K-through-grade-6 curriculum by visiting the Michael Brent Publications website at michaelbrent(dot)com.

For more information about Ruth Roberts, her songs, and her life, please visit www.ruthrobertsmusic.com and for an interview with Susan Nicoletti, please contact John Scott G of G-Man Marketing.