You are here: Home › Twyford BBQ and Catering Reports No Pork Shortage in Illinois
By Send2Press Newswire on October 3, 2012 in Business, Food, Illinois, Press Releases, Restaurant, Hotel and Hospitality 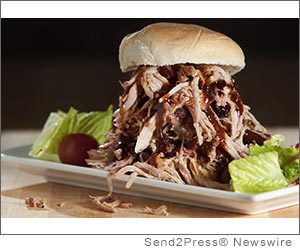 JACKSONVILLE, Ill., Oct. 3, 2012 (SEND2PRESS NEWSWIRE) — Rumors of a worldwide bacon shortage have been making headlines and nothing spells panic like the idea of a “bacon less” world. Well, Twyford BBQ and Catering is happy to report that it sees no signs of a pork shortage in its home state of Illinois and its celebrating National Pork month – whole hog.

The USDA’s recently-released numbers also point to no pork shortage. Its quarterly Hogs and Pigs’ supply report estimates for both breeding and market hogs were in line with the same report last year. As of September 1, the total inventory was reported at 67.5 million head, with 5.8 million breeding animals and 61.7 million market pigs.

“All this fuss over a bacon shortage is nothing but hype,” Randy Twyford, pitmaster and owner of Twyford BBQ and Catering, says. “We are huge supporters of the pork industry and plan to celebrate October Pork Month by honoring and supporting our pork producers’ commitment to producing safe, nutritious food as they promote animal well-being, and safeguard natural resources.”

October Pork Month reminds Americans that pork is a great product and producers have made a long-term commitment to responsible pork production.

“At Twyford BBQ and Catering, we could not live without pork and we don’t expect our clients to either,” Twyford says. “We are dedicated to the pork industry and to ensuring that its future is strong. We are also big proponents of the farm-to-table movement; our pork products are the freshest around.”

Twyford reports that a plan is also in the works, in the next few weeks, to open “TakeHomeTwyford;” carryout will be available at its world headquarters.

“So, rest assured, we’ll continue to support the pork industry through our commitment to our clients and the community,” Twyford says.

About Twyford BBQ and Catering:
Twyford BBQ and Catering brings true, championship quality barbecue to the region. Its credibility comes from its competition background and its barbecue has been professionally judged and awarded top honors by a field of certified, professional food judges that include some of the greatest names in barbecue and the food world. It has collected 10 Grand Championships, five Reserve Grand Championships and dozens of first place awards and top 10 honors for its chicken, ribs, pork, brisket, sides and desserts.

NEWS SOURCE: Twyford BBQ and Catering :: This press release was issued on behalf of the news source by Send2Press(R) Newswire, a service of Neotrope(R). View all current news at the Send2Press for Journalists Portal: http://Send2PressNewswire.com/ .