You are here: Home › ‘Green Across America’ Goes Clean Across America and Back!
By Send2Press Newswire on October 9, 2012 in California, Entertainment, Environment, Press Releases, SANTA MONICA, Calif., Transportation 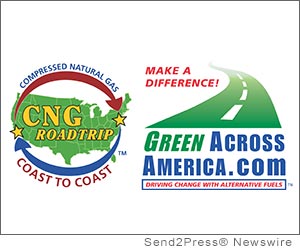 * Launching from a “National Alternative Fuel Vehicle (AFV) Odyssey Day 2012” event on the Santa Monica Pier, the program begins at 8 a.m. – 1 p.m. on Thursday, October 11th, 2012 with an Elton John musical act. Press Conference begins at 9:30 a.m. with Guest speakers to follow at 10 a.m. The specially sponsored car wrapped CNG Honda launching to its first destination at 11 am. It is scheduled to arrive back in California on November 1, 2012. Return location will be the same unless and alternative site is announced. The new 2012 Honda Civic, powered by Natural Gas and provided by American Honda, in Torrance, Calif., will travel across the U.S. and arrive on the Boardwalk in Atlantic City, N.J. before returning to California.

* The Corbitt’s goal is to do the trip on natural gas available through publicly accessible fueling stations. They will participate in AFV Odyssey Day events, public CNG fueling station Grand Openings, a press event at a natural gas drilling operation, tours of biogas plants and CNG conversion shops and more, as they travel across the country.

* In order to let the nation follow their progress, the car will be equipped with a GPS tracking system, supplied by Green Road, Inc., as part of their fleet telematics solution. “This will be a first for this type of event and allow people to actually locate and follow the vehicle both to and between events to show their support,” said Mr. Martin.

NEWS SOURCE: Media Center Entertainment :: This press release was issued on behalf of the news source by Send2Press(R) Newswire, a service of Neotrope(R). View all current news at the Send2Press for Journalists Portal: http://Send2PressNewswire.com/ .