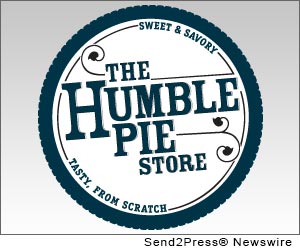 DENVER, Colo., Oct. 11, 2012 (SEND2PRESS NEWSWIRE) — A not so humble start for The Humble Pie Store! Denverites apparently are lovin’ themselves some pie. The Humble Pie Store opened a cute booth at the farmer’s market this year in Denver and the following has been immense; with people pre-ordering organic fruit pies all summer and already placing orders for Holiday Pie.

It seems when an artist turned baker, a successful restaurateur, and a local business owner get together, delicious things happen!

It started modestly enough; bound by their love of cooking, baking and indulging in quality, organic ingredients, they began focusing their efforts on savory and sweet pies, perfecting traditional recipes and giving others a modern twist. Shortly thereafter, they watched their pies fly off the shelves at farmers’ markets around the city. Denver locals have been chasing seasonal, organic pies all summer, and are already pre-ordering holiday pies for Thanksgiving!

After selling out of pies week after week, the gals realized something had to be done to keep up with demand. So the three friends set out to build a brick and mortar shop. The Humble Pie Store is located in the Historic Baker District, at 3rd and Elati, in a beautiful, historic building, which has been finished to feature their pies; the space also boasts an impressive coffee menu.

The press has taken notice as well: Denver Eater.com said, “Look for pie paradise…,” and EatDrinkDenver.com said, “Don’t miss The Humble Pie Store.” Westword noted, “Pie geeks are snapping them up faster than she can bake them….”

The Humble Pie Store Grand Opening is Saturday October 20, 2012, in the Baker Historic District. Baker residents, press, and local followers are all welcome!

About The Humble Pie Store:
Located in The Historic Baker District, in Denver Colo., The Humble Pie Store serves the Denver and surrounding market with savory and sweet pies. The pie store features the freshest ingredients, from local and organic growers when possible, and ensures that each pie is hand-made from scratch, with the greatest attention and love for the process. Humble Pie is expected to be one of the top producers of local Holiday Pie, is regularly a staple in the local Farmer’s Market scene, and accepts special orders and catering functions ranging from family/casual, to business, to weddings.

NEWS SOURCE: Humble Pie Store :: This press release was issued on behalf of the news source by Send2Press(R) Newswire, a service of Neotrope(R). View all current news at the Send2Press for Journalists Portal: http://Send2PressNewswire.com/ .