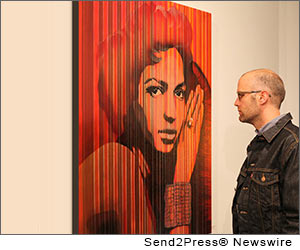 SAN FRANCISCO, Calif., Oct. 17, 2012 (SEND2PRESS NEWSWIRE) — John Waguespack is the winner of the San Francisco portion of the 3rd Annual Bombay Sapphire Artisan Series for “Deconstructing Dandridge,” a compelling portrait of the first African-American woman to be nominated for Best Actress in the Academy Awards.

The Bombay Sapphire Artisan Series, in partnership with Russell and Danny Simmons’ Rush Philanthropic Arts Foundation, has been to identify the country’s finest undiscovered and emerging talent in the field of visual arts. The competition takes place in eleven cities across the U.S. with each city sending a winning representative artist to Art Basel, Miami. Following Art Basel, co-hosted by Russell and Danny Simmons, two winners will have their work installed at Rush Arts Gallery and Resource Center in New York City throughout the month of February 2013. In 2011, the competition received more than 3,000 submissions from artists nationwide.

Dorothy Dandridge was a pioneer in deconstructing racial barriers in Hollywood and expanding society’s perception of beauty. Through his art, Waguespack transformed her from the cold black and white publicity still he found online to the smoldering beauty who entranced America with her elegance and inimitable style.

About John Waguespack:
From the rooftop of his home in San Francisco, Waguespack creates paintings, which often incorporate pop-art icons to address political issues of today and the ’70s. His cutting-edge work ranges from visual commentaries on important moments and movements in U.S. history to abstract expressionism, deconstruction, linear and pop surrealism. Waguespack has been featured on the cover of San Francisco’s 7×7 Magazine.

About Rush Philanthropic Arts Foundation:
Rush Philanthropic Arts Foundation is dedicated to providing underserved urban youth with significant exposure and access to the arts, and to offering exhibition opportunities for underrepresented artists and artists of color. Rush was founded in 1995 by three brothers: Danny Simmons, visual artist and community builder; media mogul Russell Simmons; and Joseph “Rev. Run” Simmons of Run-DMC. Rush Philanthropic believes that if you give young people the opportunity to practice and appreciate art, you will see lives transformed.

* John Waguespack featured on the cover of 7×7 SF: http://www.7×7.com/arts-culture/new-guard-5-citys-most-exciting-new-galleries .

NEWS SOURCE: John Waguespack :: This press release was issued on behalf of the news source by Send2Press(R) Newswire, a service of Neotrope(R). View all current news at the Send2Press for Journalists Portal: http://Send2PressNewswire.com/ .

Beauty TV: A Hybrid Television Network is Making Waves
Hotel Near Humboldt State University to be Sold – Conversion Opportunity to Brand the Hotel in a Strong Market