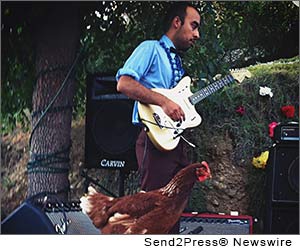 The four minute and thirty-nine second video, which can be viewed on YouTube, (http://youtu.be/ynlnp_I4vwY), was shot entirely on location at Chicano Batman’s management company, Qvole Collective, who also produced the video in Garvanza, a sub-district of Highland Park, where the collective is located.

The collaboration of Mochilla and ruffled avengers, Chicano Batman seemed a natural one; Mochilla being inherent ethnomusicologists, have joined forces with many inspiring musicians and acts of the 21st century. They are most notable for their Timeless series, a trilogy of films documenting three sold-out performances in L.A. featuring Brazilian composer, arranger and producer, Arthur Verocai, Ethiopian musician and inventor of Ethio-jazz, Mulatu Astatke and “Suite for Ma Dukes,” a 60-peice orchestral celebration of J Dilla, the music industry’s most influential hip-hop artist, composed and arranged by Miguel Atwood-Ferguson.

Aesthetically, both Mochilla and Chicano Batman share the same philosophy, which is why they linked up to create a visual narrative for the bands single, “Joven Navegante” off their same-titled EP that was released in July. Brian notes of the alliance, “they understand to keep the visuals clean and simple, let the music speak for itself.”

Clean and simple was achieved, the band suited and booted up in their vintage tuxedo-ruffles for an invite-only intimate show with close friends and family on a makeshift stage. Mochilla caught the vibe of a laid-back house party with live music, good eats and flowing drinks, Brian further elaborated, “I wanted it to be just like one of there summer kick-backs, I wanted that East L.A. vibe with a chicken running around while the sun sets over Southern Cali.”

Qvole Collective, in-conjunction with the video premiere, will also be releasing Joven Navegante’s EP on vinyl that came to production by their Kickstarter supporters this past June.

About Mochilla:
Mochilla (www.mochilla.com), a production company formed by photographers Eric Coleman and Brian (B+) Cross in 1997. Mochilla specializes in bringing new and undiscovered arts and music from various cities and continents to the attention of curious music lovers worldwide.

NEWS SOURCE: Qvole Collective :: This press release was issued on behalf of the news source by Send2Press(R) Newswire, a service of Neotrope(R). View all current news at the Send2Press for Journalists Portal: http://Send2PressNewswire.com/ .

Hotel Near Humboldt State University to be Sold – Conversion Opportunity to Brand the Hotel in a Strong Market
Barack Obama and Mitt Romney are Arguing in Election Debates, Hire an Attorney to Argue for You with a Special Discount