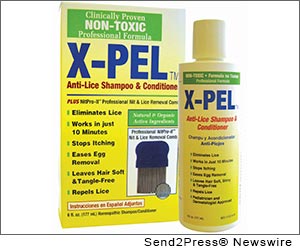 BRIDGEPORT, Conn., Oct. 18, 2012 (SEND2PRESS NEWSWIRE) — October is the month the kids begin to scratch, says George Coleman, founder and president of Connecticut’s Dermedics Laboratories. That’s because the start of a new school year has children literally putting their heads together – and that’s how head lice infestations get started.

That is why, Coleman says, it is important for parents to understand the basic “Facts of lice” before an infestation strikes their child’s classroom.

The “Facts of Lice”:
“Fact #1 is that many of the lice products on drugstore shelves contain lindane, permethrins, malathion and other potentially toxic chemicals,” Coleman says. “Fact #2 is that new strains of head lice are evolving that are resistant to those toxins, so treating with these older products may not even be effective.”

“Fact #3 is that removing the lice eggs, or nits, is the most important part of the treatment process,” Coleman adds. “A single louse can lay more than 50 eggs per week. And those eggs are attached to a child’s hair with a sticky cement that makes them extremely hard to remove.”

That is why Coleman’s company developed X-PEL Anti-Lice Shampoo & Conditioner – a non-toxic alternative to older head lice treatments. Clinical testing shows that X-PEL eliminates lice in about ten minutes and makes it significantly easier to remove the lice eggs. Unlike toxic lice treatments, X-PEL also stops the itching caused by lice bites, and leaves the hair soft, shiny, and tangle-free.

“If every child in my daughter’s class was using X-PEL, there would be no problem,” one parent says. “It got rid of my daughter’s lice, and they haven’t come back, even though they are still going around her class. I will never be without it.”

X-PEL is available throughout the U.S. and Puerto Rico in stores such as Harris Teeter, Kinney Drugs, Drug Warehouse, Kerr Drug Stores, USA Drug and Hannaford Brothers Supermarkets. A complete list of retailers carrying X-PEL is available at http://x-pelheadlice.com/consumerlist.htm .

NEWS SOURCE: Dermedics Laboratories :: This press release was issued on behalf of the news source by Send2Press(R) Newswire, a service of Neotrope(R). View all current news at the Send2Press for Journalists Portal: http://Send2PressNewswire.com/ .