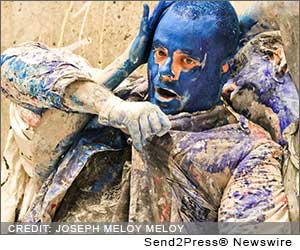 The epic art performance piece which has been featured in The Huffington Post, Marie Claire, Gothamist, Hyperallergic and many others, is the creative genius of artist Michael Alan. As described by Alan, “The Living Installation Project is a human activist art mission. The goal is to reinforce that humans are living installations by creating a space for people to open up and come together, and that all are equal through the process of creating art.”

After eight years of creating performance art, Michael Alan was recently severely injured and suffered major spinal damage as well as a concussion. His injuries have affected his ability to walk and perform.

Despite his physical challenges, “The Living Installation Project” will return November 9 at ABC NORIO for a special eight-hour healing show.

Family Misfit Healing: No matter how different and odd we might be, we all have the power to heal. Alan, while healing after intense spinal surgery, will team up with seven performers to create a world based on acceptance and growth. A strong and dynamic family portrait will be born, created from scratch. The eight-hour mega show, a true experience/happening, will be an escape where guests can do whatever they choose. The space will start with nothing, where Alan, seated, will build a world around him from start to finish with an eight-person tableau; nude and then dressed with everything under the sun; birthed and animated with pure emotion.

It’s a happening. Come have fun, watch, get lost in the creation. Hang out, draw, write, create. Come and go as you want, and be a part of it!

Tickets are $20 and can be purchased in advance http://www.michaelalanart.com/art/upcoming-projects/ or at the door.

About Michael Alan:
For Michael Alan, art is a combination of harmonious opposites, close observation, catharsis, a means of communication and a radical juxtaposition of dimensional elements. He challenges everything: concepts of figure, composition, media and movement, including his own. Exploring the ambiguity of time and history, Alan’s work focuses on cross-breeding and the relationship of destruction and creation.

About Art for Progress:
Art For Progress (AFP) is a 501(c)3 nonprofit arts organization committed to the cultivation and support of emerging artists working in diverse genres: the visual arts, fashion, music, film, and new media. Based in New York City, AFP seeks to increase the visibility of talented artists, to raise the awareness of the importance of arts education in public schools, and to support those same arts through its arts education program. Learn more at: http://www.artforprogress.org/ .

Comments:
“Alan’s work and style of organizing his installations and exhibits is unarguably infused with his years of work as an outsider-artist, his passion for expression, his years of promoting music, and his love of collaboration.” – Huffington Post.

“The Living Installation brings everyone from artists sketching to club kids to the wealthiest gallery owner to a kid from the projects. Much like Keith Haring drawing with chalk on the subway posters, Michael Alan’s Living Installation is all about accessibility of art.” – Crudo Magazine.

“I am Michael Alien, an alien who wants good and to exist with a twist of chaos and a big splash of toxic paint!” – Art Info.

* Photo Caption: A photo from a past “Living Installation” performance. Photo by Joseph Meloy Meloy.

NEWS SOURCE: Art for Progress :: This press release was issued on behalf of the news source by Send2Press(R) Newswire, a service of Neotrope(R). View all current news at the Send2Press for Journalists Portal: http://Send2PressNewswire.com/ .