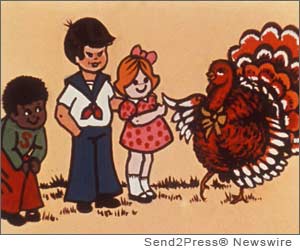 LOS ANGELES, Calif. (SEND2PRESS NEWSWIRE) — With an entire album of family-friendly tunes, Ruth Roberts Music is ready to help keep everyone singing through the November holidays with “Thanksgiving Songs That Tickle Your Funny Bone,” now available on iTunes.

“This wonderful season means family gatherings, turkey dinners, pumpkin pie, and good old-fashioned sing-alongs,” states Susan Nicoletti, Director of Operations for Goldenrod Music, the publishing company that oversees the songs of the late Ruth Roberts. “The songs on this collection are good fun for the whole family, even the youngest ones.” And she knows what “G-Rated” is all about after her five years of serving on the ratings board for the Motion Picture Association of America.

Ruth Roberts was one of the most consistently successful songwriters from the 1940s through the 1990s. Every sports fan knows some of her work, from “Meet the Mets” to “It’s a Beautiful Day for a Ball Game” to “Mr. Touchdown, USA,” which is a college football favorite.

“Beatles fans probably know that the Fab Four recorded ‘Mailman Bring Me No More Blues,’ which is on the ‘Anthology 3′ album. But they may not realize that song was written by Roberts,” Nicoletti points out, adding that the song was also recorded by Buddy Holly, Oliver Nelson, and Lefty Frizzell.

It is in the area of children’s music that Ruth Roberts may be best known, starting with her work with Bob Keeshan, who was revered for his portrayal of kids TV personality Captain Kangaroo. As a teenager, Roberts was influenced by Broadway shows and this resulted in her writing full-length and mini-musicals for elementary schools, all of which appeal to the “Glee” fan in everyone. Teachers and educators can discover more about her musicals written for a K-through-grade-6 curriculum by visiting the Michael Brent Publications website at michaelbrent(dot)com.

In addition, movie and TV viewers have heard Roberts’ songs in “Yes Man,” “The Benchwarmer,” “A Dirty Shame,” “Everybody Loves Raymond,” “Seinfeld,” and Conan O’Brien.

For more information about Ruth Roberts and her music for kids, families, and sports fans, please visit www.ruthrobertsmusic.com and for an interview with Susan Nicoletti, please contact John Scott G of G-Man Marketing.

Video of “The Best Thanksgiving”