You are here: Home › Cristelle’s Music Breaks Out of Clubs and onto Soundtracks
By Send2Press Newswire on November 2, 2012 in California, LOS ANGELES, Calif., Movies and Film Making, Music and Recording Industry, Television, U.S. Newswire Stories, Videos 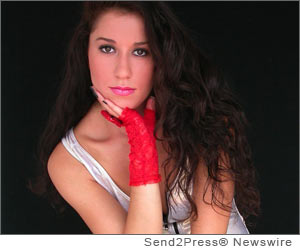 LOS ANGELES, Calif. (SEND2PRESS NEWSWIRE) — While DJs at nightclubs are using Cristelle’s “Breakdown” to keep dance floors filled, her recordings are also playing on the soundtracks of television programs across a wide spectrum of entertainment.

Cristelle’s song “Dance My Life Away,” the title of which seems to sum up part of her approach to the world, has had two placements. The first was in the Cinemax production of “Femmes Fatales” and the second was in the VH1 series, “Basketball Wives.”

There have also been two placements for Cristelle’s “Gonna Love You,” the first in the CW series “Shedding for the Wedding” and the second in the long-running and iconic CBS series, “The Young and the Restless.”

“No Rush,” a song whose title is the antithesis of Cristelle’s non-stop schedule, was featured in the Lifetime network motion picture, “The Natalee Holloway Story.”

“While making music is such a joy for me, it’s sometimes hard to concentrate on the business side of things,” Cristelle admits, “but fortunately there’s a great team of experts who look after all the connections and placements. The success they’ve had is really exhilarating for me.”

“Working with Cristelle is exciting,” notes her producer, Peter Roberts. “We’re all very pleased with the use of ‘Breakdown’ in clubs and expect that this song will start to appear on soundtracks of motion pictures and television programs along with the other great tunes that are already placed.”

Many of Cristelle’s songs reflect her upbeat personality. “Living life to the fullest” seems to be her motto. “I’m always an on-the-go type of girl,” says the 23-year-old singer, dancer, and model. In particular, the “Breakdown” single celebrates the enthusiasm of youth, the headiness of love, and the continual quest for sharing good times.

About Cristelle
For Cristelle, her love of performing became evident about the time she learned to walk. She feels fortunate that her family was involved with music and the arts, “so I was always surrounded by singers, actors, and artists,” she notes happily. Cristelle earned a spot in Los Angeles High School for the Performing Arts and spent one season with Disney On Ice performing in “High School Musical.”

Cristelle Music Online
A music video for “Breakdown” is now on YouTube and the single is available for sale on iTunes and Amazon. Her first album, “Rush,” will be released later this year by BDM Records. As with the single, the producer is Peter Roberts, who has had more than 250 of his songs recorded by artists in almost every genre, including Irene Cara and jazz superstar George Benson.

More Information
For complete news and information on Cristelle, visit her website at http://www.cristellemusic.com where you’ll find her music as well as links to her social network pages.