You are here: Home › Alegria Farmacy Keeps Its Clients Young and Healthy
By Send2Press Newswire on November 8, 2012 in Agriculture and Farming, California, Food, Health, Press Releases 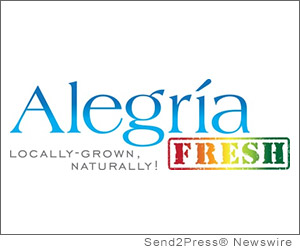 LAGUNA BEACH, Calif., Nov. 8, 2012 (SEND2PRESS NEWSWIRE) — “This food will keep you alive and vital, and I am living proof,” says Francis Lingel, a 90-year young veteran who has joined Alegria Farm’s team to assist with farm tours. “Fresh greens are the secret to longevity,” he adds.

In July this year, Francis stomped into Alegria Farm and asked the team to guess his age. Followed by a series of replies averaging between 65 and 75, he proudly let everyone know that he’d be celebrating his 90th birthday shortly.

Needing no cane, no walker and a light bounce in his step, Francis informed the Alegria team that eating freshly harvested locally-grown fruits and vegetables was the key to his health and vitality.

“I am still a very young fellow at heart,” says Francis.

Thirty-three years ago, doctors wanted to perform angioplasty on Francis because he had a 95 percent blockage in his lower descending artery. Angioplasty is a procedure used to open narrow or blocked coronary arteries and is generally not a permanent solution. He refused the procedure and decided to try a diet of natural plant based foods.

After years of skepticism about diets and convinced that as long as his weight wasn’t fluctuating he could continue to eat anything, Francis gave in to his vegan daughter’s urging and investigated the teachings of Dr. John McDougall (www.drmcdougall.com) and Dr. Michael Greger (www.nutritionfacts.org), well-known authors and leaders in health and prevention.

“I learned how to eat to fuel my body and my health through a diet rich in freshly harvested greens, veggies, fruits and nuts,” said Francis. “Dr. Gregor’s blog states that hydroponic plants have more minerals and vitamins and that is why I found Alegria Fresh. Their superior nutrient-rich produce gives me a powerful fresh start. Their produce can heal others who are willing to give it a try.”

Following a whole food, plant-based diet and now completely healed of his heart disease, Francis Lingel joins the Alegria Fresh team working as a volunteer relating his real-life “longevity” testimonial to all those who will listen. Francis lives in San Juan Capistrano, Calif., and visits the farm regularly to pick up his fresh greens and herbs.

Alegria Farm produces an exotic tasting variety of leafy greens, medicinal herbs and heirloom vegetables. Hydroponic farming is soilless and utilizes coconut fiber instead of organic soil, which virtually eliminates toxic pesticide usage to produce stronger plants that are substantially more nutrient-rich. For more information on Alegria Farm or to schedule a tour, please visit www.AlegriaFresh.com or follow on Facebook and Twitter. Alegria Farm is the high-performance urban agriculture division of EnviroIngenuity. Produce from the farm is sold under the Alegria Fresh tradename.

NEWS SOURCE: Alegria Farm :: This press release was issued on behalf of the news source by Send2Press(R) Newswire, a service of Neotrope(R). View all current news at the Send2Press for Journalists Portal: http://Send2PressNewswire.com/ .