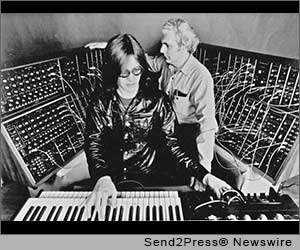 ASHEVILLE, N.C. (SEND2PRESS NEWSWIRE) — In celebration of its recent six-year anniversary, the non-profit Bob Moog Foundation is pleased to announce a generous donation from American synthesist Roger Powell: a dual-manual keyboard that Moog Music custom built for him in 1974. The keyboard, which Powell acquired shortly after joining Todd Rundgren’s Utopia, was part of a synthesizer comprising two Moog System 55 cabinets housing a host of modules.

“The keyboard was designed to my specifications,” says Powell. “Bob himself worked on the mixer circuit design.” Powell had been doing clinics for Moog Music in the U.S. and Europe, sometimes with Bob Moog when the system was assembled for touring with Utopia.

Like a lot of Moog gear, Powell’s keyboard comes with a fascinating story:

“After the first evening of a two-night booking in Cleveland, the custom keyboard was stolen from the stage. Strangely, the modular system cabinets were left untouched. My guess is that the thief believed the keyboard itself to be playable, as it resembled a two-manual organ. A few years later, the System 55s were destroyed in a warehouse fire, thus removing all remnants of the original system.

“In 2002, much to my surprise, the missing keyboard was listed on eBay. The person offering the keyboard had no idea it had been stolen and was not the thief. (He was younger than the age of the keyboard.) I was able to negotiate its return and have held onto it since, hoping to refurbish it but never completing that project.

“After Bob’s demise and the creation of the Bob Moog Foundation, it occurred to me that the custom keyboard deserved to be in a place where it can serve as my personal tribute to my dear friend Bob Moog. Bob and I spent some very happy times together; I will always remember laughing a lot with him, as we both shared an acerbic, wisecracking sense of humor.”

The Bob Moog Foundation is honored to accept Powell’s donation, and we look forward to restoring the keyboard to its original condition. Our goal is to display it publicly so that, in Powell’s words, “People can enjoy seeing it and hearing about its interesting past.”

The Bob Moog Foundation is quick becoming a repository for a variety of donated artifacts from music and synthesizer enthusiasts from all over the world. The foundation is stewarding the preservation of donated items including: synthesizers, controllers, photos, schematics, correspondence, equipment, literature and more. Interested donors can contact the foundation at info@moogfoundation.org.