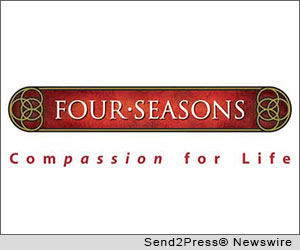 FLAT ROCK, N.C., Nov. 27, 2012 (SEND2PRESS NEWSWIRE) — Four Seasons, Compassion for Life (www.fourseasonscfl.org) has received recognition as a top hospice care provider in the state for its significant percentage of patients served for almost a decade.

“This death service ratio is one of the best indicators of how well a hospice organization is serving those who needs its services,” says Chris Comeaux, president and chief executive officer of Four Seasons.

In 2010, the most recent year for which figures are available, national hospice utilization was up by seven percent, with a national average of 41.1 percent. North Carolina ranked 26 in hospice utilization, with an average rate of 40.6 percent. Within Henderson County, Four Seasons served almost 75 percent of patients at their end of life through its hospice and palliative care programs, and was recognized as the leading provider of hospice services in North Carolina. For more information on Four Seasons’ services, visit http://www.fourseasonscfl.org .

With a national upward hospice utilization trend of 1.5 – 2 percent each year since 2006, and a 2.2 percent increase in North Carolina in 2009-2010, the region demonstrates an increase in the number of patients who receive hospice care.

“The vision of Four Seasons is to provide the best end-of-life care to all those who need it in western North Carolina,” says Comeaux.

More than 1.58 million people living with a life-limiting illness receive care from hospice and palliative care providers in the U.S., according to the National Hospice and Palliative Care Organization. Four Seasons serves more than 1,000 patients in western North Carolina each day.

NEWS SOURCE: Four Seasons Compassion for Life :: This press release was issued on behalf of the news source by Send2Press(R) Newswire, a service of Neotrope(R). View all current news at the Send2Press for Journalists Portal: http://Send2PressNewswire.com/ .