You are here: Home › The Newest Champagne Brand on the Market and Already an Entire Range Rated 90+
By Send2Press Newswire on December 3, 2012 in Business, Food and Beverages, France, Press Releases, Product Launches 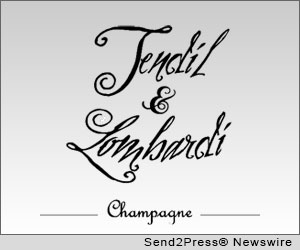 PARIS, France, Dec. 3, 2012 (SEND2PRESS NEWSWIRE) — Tendil & Lombardi announce their new range of true Champagnes to hit shelves in the U.S. for the 2012 holiday season. Tendil & Lombardi Champagne is the project of Laurent Tendil and Stephane Lombardi, childhood friends from Lyon, France. Champagne lovers from early on, Tendil et Lombardi both left top management positions in multi-national companies when they made the leap towards what had been a dream for years, creating their own Champagne.

After reaching an agreement in 2007 with a producer allowing them to use parcels and equipment in the Aube region (Cotes des Bars), Tendil and Lombardi started the elaboration of their first cuvees, which would be released in 2011.

Lombardi explains “We both decided to chase down our dream, despite the economic climate and personal financial risks. We’ve had some very rough nights where I would call Tendil saying this project is hopeless, and he’d tell me that we’d be fine — some other nights he would call and I would be the one to reassure him.”

The road is still very long for these two entrepreneurs, nevertheless Tendil & Lombardi Champagnes are already sold in eight countries, and all six cuvees have been rated 90+ by Wine Spectator, not to mention the positive response from Wine Enthusiast, Stephen Tanzer and others.

Tendil & Lombardi’s six cuvees are mainly mono-varietal, either Pinot Noir or Chardonnay. Lombardi explains, “This choice allows us to produce Champagnes that respect the specificity and authenticity of these two noble Champagne grapes.” A highlight of the range is their “Rose de Saignee.”

Whereas most modern rose Champagnes are made by adding red wine, Tendil & Lombardi’s rose gets its enchanting pink color from the traditional method of leaving the juice in contact with the skins of the Pinot Noir. The only blended cuvee in the range is the Cuvee Hymenee.

NEWS SOURCE: Champagne Tendil and Lombardi :: This press release was issued on behalf of the news source by Send2Press(R) Newswire, a service of Neotrope(R). View all current news at the Send2Press for Journalists Portal: http://Send2PressNewswire.com/ .