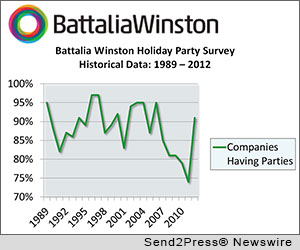 Holiday parties were held by 95 percent of companies in 1988, the first year of the survey, and an all-time high of 97 percent was recorded in 1996 and in 1997, all years when the economy was robust.

“From the beginning the study has been a reliable barometer of both prevailing economic conditions and corporate confidence,” said Dale Winston, Battalia Winston’s Chairwoman and CEO.

“Despite the challenging economic environment, it seems that companies are moving back to a state of normality,” said Winston. “Parties are still the last vestige of company sociability.”

* Why have parties? Nearly half (42 percent) are doing so to build employee morale, while about a third (33 percent) are holding a party to celebrate 2012 as a good year and 7 percent to show employees and clients that they are optimistic about next year. 18 percent of companies selected “other,” and the breakdown for “other” is as follows: 10 percent are hosting parties because of tradition, 4 percent are hosting parties simply because they like to, 3 percent say it’s “the right thing to do,” and 1 percent are doing so to honor retirees.

* The budget: Conservatism still rules; 100 percent of companies said that their party will be the same as previous years – as opposed to more modest or more lavish.

* Drink up — if you can: Drinks will be served at most (79 percent) parties, but nearly one-in-four (21 percent) will be alcohol-free.

* Holiday charity efforts: While about half (51 percent) of the companies are donating money or goods (up from 39 percent last year, 47 percent in 2010, 66 percent in 2009, and 74 percent in 2008), employees at 16 percent of the firms will be doing volunteer work. 28 percent of the companies aren’t involved in holiday charitable activities. Some of these activities include Toys for Tots, Blood Drives, etc. 5 percent indicated other charity efforts will be made, such as sending holiday cards and matching funds.

* Employee morale: A majority (69 percent) of companies are taking steps to boost employee morale for the year to come (e.g. flexible work schedules, performance incentives, pay raises, team building/training, etc.), leaving only 12 percent of companies that have no such plans. 19 percent were unsure. Last year, almost half (48 percent) of the respondents planned morale boosting actions, which is a 43.75 percent increase.

Has optimism replaced much of last year’s caution? “We believe this year’s increase in holiday parties reflects stabilization as opposed to a positive outlook for 2013,” said Winston. “Boosting employee morale is also a driver in the increase of holiday parties.”

The 2012 Battalia Winston nationwide survey was conducted among a cross-section of 105 companies.

About Battalia Winston:
Battalia Winston has been successfully meeting client needs in executive recruitment for almost 50 years and is currently ranked as one of the nation’s 12 largest retained executive search firms, as well as one of the world’s largest woman-owned search firms. Headquartered in New York City, the firm also has offices in New Jersey, Boston, Washington, D.C., and Chicago. Battalia Winston is an agile and uniquely flexible firm and their culture is focused on providing highly personalized, responsive client service.

NEWS SOURCE: Battalia Winston :: This press release was issued on behalf of the news source by Send2Press(R) Newswire, a service of Neotrope(R). View all current news at the Send2Press for Journalists Portal: http://Send2PressNewswire.com/ .