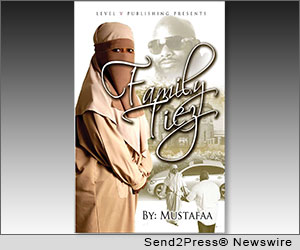 A fictional story that news and law enforcement sources said, “apparently was as much a documentary effort as one of creative writing.”

“Family Tiez” will be re-released for purchase in eBook formats, including Kindle and iBooks, by Level V Publishing mid-December 2012. “Family Tiez” is close to, but way more than what the media and law enforcement have characterized it as: it is life imitating art. The author invites readers to witness “Family Tiez” for themselves. The July 2008 arrest of Mustafaa was carried by various media outlets across the country, including USA Today.

“Family Tiez” is the fictional story of a Muslim family’s struggle to stay together through the trials of the urban drug culture: addiction, drug dealing, dirty cops, prison, and murder; as told by someone who has walked several miles in each character’s shoes. Mustafaa did not receive a life sentence; he is expected to be home soon. Level V’s upcoming releases include Mustafaa’s “Family Tiez II: downward Departure,” and Mustafaa’s highly anticipated, mainstream hit, “Actual Innocence.”

In early 2006, the Philadelphia Daily News and The News Journal both ran stories about urban fiction authors and Mustafaa was featured in both. Both stories, in essence, posed the question that since several authors, including Mustafaa, began writing from prison, would writing help curb recidivism by providing a viable avenue for authors to earn a living based on the popularity of urban literature?

Mustafaa is outspoken on curbing crime and reducing recidivism. He especially emphasizes reaching at-risk youths before their lives become rooted in “the system.” He hopes to reach them through the intensive, residential program he has developed, entitled H.O.M.E. (Habilitate, Orient, Mentor, and Educate).

NEWS SOURCE: Level V Publishing :: This press release was issued on behalf of the news source by Send2Press(R) Newswire, a service of Neotrope(R). View all current news at the Send2Press for Journalists Portal: http://Send2PressNewswire.com/ .