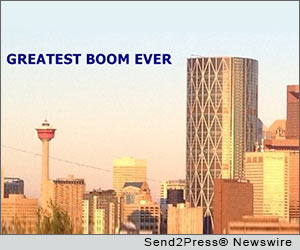 “This new iPhone App allows investors to check information contained on the website www.greatestboomever.com in the most accommodating fashion possible via their smartphone,” comments Joe Iannuzzi, President and CEO. He adds, “We have received feedback from our readers worldwide that an iPhone App would be more convenient for them and we have responded to that request.”

Greatestboomever.com is currently focused on Alberta, Canada which is repeatedly ranked as the number one economy in North America and its real estate future looks bright. Alberta utilizes Canada’s world-class banking system and unlike many other parts of the world, the province has fully recovered from the 2008 global economic crisis. It also has one of the highest nominal gross domestic products per capita in the world with the two largest cities of Calgary and Edmonton amassing a U.S. level of wealth.

The site presents vital metrics pertaining to Alberta’s broad economic trends by utilizing a proprietary information gathering algorithm developed by Mr. Iannuzzi. The iPhone App represents the first in a number of steps to upgrade and improve the underlying technology powering the site before it is expanded to cover other geographic markets with a similar analysis technique. “This site is a perfect for adding some artificial intelligence capabilities to assist in providing the most relevant data possible to the readers,” commented Karl Meema, the Chief Technical Officer.

About Joe Iannuzzi:
Iannuzzi graduated from the University of Calgary with a degree in Physics and has completed the Canadian Securities Course. He is a dual award-winning real estate investor and is well known in Alberta for providing leading-edge unbiased real estate fundamentals. He has helped aspiring investors to build solid investment portfolios. He was previously employed as an oil and gas accountant in Calgary’s energy sector.