ELY, Minn., Jan. 10, 2013 (SEND2PRESS NEWSWIRE) — The 20th annual Ely Winter Festival runs from February 1st through the 10th in the northern Minnesota tourist city known for its local beauty and wilderness. The volunteer Board has announced a celebratory, expanded schedule of events with something for all ages and interests taking place over the Festival’s 10-day period for 2013: snow sculptures, an historic Voyageur Encampment, a skiing/snowshoeing triathlon, a crafts fair, a dance, several food events, musical concerts, educational programs, and the annual Ely ArtWalk.

The cornerstone of the Festival is the International Snow Sculpting Symposium in the town’s Whiteside Park with 20 smaller “amateur” blocks and more than 20 large “expert” blocks, each carved by a team composed of three or more. The Symposium has reached out to all past carvers for an expanded Symposium this year.

“We’re all working hard to bring snow to the park,” said Chris Ellerbroek, co-director of the Symposium. “There’s plenty in the area, it’s just a matter of getting it in trucks and filling the forms.”

Alongside the carvers in the park is an authentic Voyageur Encampment, with the participants in historic garb camping outside over the three-day weekend.

The downtown area of the town becomes a veritable art gallery, as merchants clear their windows to display local artists’ works in the Ely ArtWalk, which runs over the 10 days of the Festival. Over 450 pieces of art by 120 artists were displayed in 2012, and this year expectations are similar.

On Thursday, January 31, 2103, the Ely Steak house hosts the Snow Carver’s Jam as local musicians jam in an entertaining evening of music.

Ely Community Resource hosts a Spaghetti Feed on Friday evening, February 1, benefiting local youth and families, followed by an Opening Ceremony Concert, which will include musical entertainment and the “passing of the paddle” to this year’s Grand Marshals, Emily Wahlberg and Barb Berglund.

During the day on Saturday, February 2, is the NLAA crafts fair, a fish fry at Veterans-on-the-Lake Resort, and the second annual Boathouse Brewpub Winter Classic Triathlon sponsored by the Nordic Ski Club. The latter involves snowshoeing, skiing and drinking (water, that is!).

Also on Saturday, Vermilion Community College holds an open house, the Dorothy Molter Museum, the Wolf Center and Bear Center are all open for visits, the Ely ArtWalk holds its Artists’ Meet and Greet, and Twin Metals Minnesota will be hosting an open house.

Saturday night is the second annual Polar Bear Dance, presented by the Ely Rotary from 8:00 PM to midnight at Amici’s Event Center. Raffle items will be available, and proceeds benefit community projects, including the Winter Festival. The dance is an adults-only event.

The second weekend of the Festival is packed with events as well. On Thursday evening, Jerritt Johnson, Director of Education, presents “Wolves as a Political Barometer” at the International Wolf Center. E3 will also present an Energy Symposium talk at Vermilion Community College that night.

On Friday, February 8, the Boundary Waters Blues Fest and Ely TV will host a blues concert at Amici’s Event Center. That evening the film about the campaign for clean water, “Sled Dogs to Saint Paul,” will be screened at Vermilion College.

For outdoor and history enthusiasts, on Saturday, February 9, Outward Bound guides a group by snowshoe to the Hegman Lake Native American Pictographs (snowshoes are provided). Also on Saturday, the Vermilion Law Enforcement Club hosts in an ice-fishing contest on Shagawa Lake, and the Igloo-Creek Ridge Third Annual Radar Run snowmobile event will be held on White Iron Lake.

On Sunday, February 10 at 2:30 p.m. in the Washington Auditorium, the Mesabi Community Orchestra presents a celebration of Nordic music with selections by Nielsen, Sibelius, and Grieg. 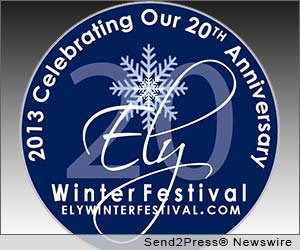 Festival pins, T-shirts, beanies, brochures and information will be available during the Festival at their Headquarters, the Front Porch Coffee and Tea Co. on Sheridan Street in Ely.

Up-to-the-minute details on events and Festival news can be found on the Festival’s website ElyWinterFestival.com. Of special interest is a live web cam of the park and the snow sculptures available on the site during the Festival.

NEWS SOURCE: Ely Winter Festival :: This press release was issued on behalf of the news source by Send2Press® Newswire, a service of Neotrope®. Original Source: https://www.send2press.com/newswire/Ely-Winter-Festival-Celebrates-20-Years-with-Snow-Sculptures-and-ArtWalk-Turning-City-into-Veritable-Art-Gallery_2013-01-0110-001.shtml.