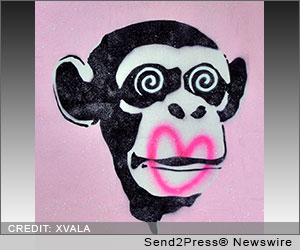 To represent the past, present, and future of celebrity arcs based on their individual confrontation with hardship in the spotlight, XVALA has invaded the residential trash of celebrities Robert Downey Jr., Lindsay Lohan, and Taylor Swift, for his latest series of paintings.

A limited edition series of paintings imbued with reflecting powder created from broken down glass that was collected and mixed from all three celebrity’s residential trash comprise the exhibit, which features a work of L.A. street art by the artist, appropriated by NBC’s “Tonight Show with Jay Leno” for use as the backdrop for musical guests.

“The appropriated image is the artist’s signature piece,” said Cory Allen about the chimpanzee head image with google-eyes and heart-shaped smeared lipstick, called Celebrity Chimp. “The artist is re-appropriating it from ‘The Tonight Show.'”

The paintings are stamped with the official “Tonight Show” logo.

“A celebrity’s personal life has become more entertaining than their professional work,” said Cory Allen. “Hopefully the next generation will value art over entertainment.”

The artist is dedicating his “Tonight Show” to programmer and internet activist, Aaron Swartz, in a heart-felt response to his passing. “Aaron’s legacy has had a huge influence on my art,” said XVALA.

* PHOTO Caption: “The Tonight Show with Celebrity Chimp” by XVALA.

NEWS SOURCE: Cory Allen Contemporary Art :: This press release was issued on behalf of the news source by Send2Press(R) Newswire, a service of Neotrope(R). View all current news at the Send2Press for Journalists Portal: http://Send2PressNewswire.com/ .