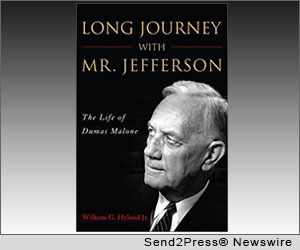 TAMPA, Fla., Jan. 25, 2013 (SEND2PRESS NEWSWIRE) — The magisterial “collaboration” over half a lifetime between historian Dumas Malone and his subject, Thomas Jefferson, is the basis for William G. Hyland Jr.’s compelling “Long Journey with Mr. Jefferson” (ISBN: 978-1612341972; Potomac Books). Malone, the courtly and genteel historian from Mississippi, spent thirty-eight years researching and writing the definitive biography of the man who “invented the United States of America.”

Hyland provides a surprising portrait of the man many consider America’s greatest historian, recording in detail Malone’s struggle to finish his towering six-volume work on Jefferson through excruciating pain and then blindness at the age of eighty-three. Hyland includes Malone’s previously unpublished correspondence with such notables as John F. Kennedy, Harry S. Truman, George H. W. Bush, Felix Frankfurter, and Fawn Brodie. Readers are treated to an exclusive look at private family documents and Malone’s unfinished memoir, which reflects on history, social commentary, and his life’s accomplishments.

Offering much more than most biographies, this book imparts extensive insights into Malone’s earlier years in Mississippi and Georgia, and how they shaped his character. Through interviews with his intimates, family members, rivals, and subordinates, Hyland generates a true portrait of the man behind the intellect and the myth.

William G. Hyland Jr., a native of Virginia, is the author of “In Defense of Thomas Jefferson” (2009), nominated for the Virginia Literary Award, and a professor at Stetson University College of Law. He is a member of the Virginia and New York Historical Societies, serves on the board of directors of the Thomas Jefferson Heritage Society, and has lectured at the National Archives and for the Colonial Williamsburg Foundation. He lives in Tampa, Florida.

“Anyone interested in how good history is written will be mesmerized by this book. If some readers also want to find out whether recent assaults on Thomas Jefferson’s reputation are based on fact or on factoids, they will find a veritable mother lode of information here.” – Thomas Fleming, author of The Intimate Lives of the Founding Fathers

“William Hyland has done a tremendous service to us all by producing this carefully researched, thoroughly documented, yet very readable biography of the greatest Jefferson scholar the world has to date produced. I recommend the volume enthusiastically for scholars of all ages.” – Robert F. Turner, professor of law, University of Virginia, and chairman, Jefferson-Hemings Scholars Commission.

“Hyland’s work is more than the biography of a historian. His account of Malone’s intellectual struggles with and for Jefferson make an original and important contribution to Jefferson studies and to the understanding of American thought in the twentieth century.” – Clyde N. Wilson, distinguished professor of history (emeritus), University of South Carolina.

“In Long Journey with Mr. Jefferson, Hyland proves the enduring power of Dumas Malone’s principled adherence to historical truth and scholarly excellence. A timely reminder of the importance of integrity and character in an era of agenda-driven Jefferson studies.” – Eric S. Petersen, editor of “Light and Liberty: Reflections on the Pursuit of Happiness.”

“William Hyland has captured Dumas Malone as a warm and genial family man, a world-renowned scholar, and the world’s greatest Jeffersonian authority and author. His description of his encounters with some of the brightest educators, political leaders, and journalists of his day is fascinating.” – W. McKenzie Wallenborn, president, Thomas Jefferson Heritage Society.

NEWS SOURCE: William G. Hyland Jr. :: This press release was issued on behalf of the news source by Send2Press(R) Newswire, a service of Neotrope(R). View all current news at the Send2Press for Journalists Portal: http://Send2PressNewswire.com/ .

The Traveling Vineyard Joins Forces with Award-Winning Food Bloggers
Ohio Educator and Veteran to Speak in D.C. for Troops to Teachers