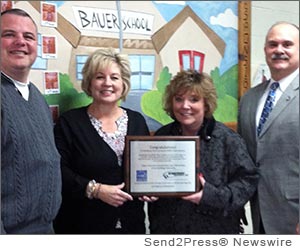 To qualify for the ENERGY STAR certification, a building must earn a 75 or higher on the EPA’s 1-100 energy performance scale, indicating the facility performance scale. The facility must perform better than at least 75 percent of similar buildings nationwide to receive the certification. Miamisburg City School District has been implementing many positive changes to the district’s facilities, including HVAC upgrades, building controls, interior and exterior lighting, and electric procurement to reduce the cost of utilities and ultimately to save taxpayer dollars.

Bauer Principal, Kelly Lee Marker, noted that the new hallway and gym lights have provided improved lighting levels to the building in addition to being energy efficient. Occupancy sensors control the lights to prevent energy waste.

Greg Smith, President of Energy Optimizers, USA, stated, “We are extremely excited to be working with the Miamisburg City School District to not only save them a substantial amount of money, but also to save the environment. We are confident that other buildings will also qualify for the ENERGY STAR certification.”