You are here: Home › NoHo Goes Nashville as Jane Bach, Sandra Piller and Special Guests Perform a Songwriter’s Round at The Other Door
By Send2Press Newswire on May 13, 2013 in California, LOS ANGELES, Calif., Music and Recording Industry, Press Releases, Theater and Live Events, U.S. Newswire Stories 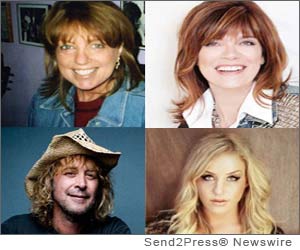 LOS ANGELES, Calif., May 13, 2013 (SEND2PRESS NEWSWIRE) — Songwriters getting together to share their work in the up-close-and-personal setting of a “round” is a Nashville tradition that’s now coming to The Other Door in North Hollywood in a special Thursday evening performance on May 16 featuring Jane Bach, Sandra Piller, Kaela Gardner, and Jim Huff.

“It’s exciting to bring a songwriter’s round to NoHo,” notes Jane Bach, organizer of the event with Piller Sounds Music (www.pillersoundsmusic.com). “There is an intimacy to a round that you won’t often find at most clubs.” This special one-time performance will feature four singer-songwriters: Bach (www.janebach.com), who has flown in from her Nashville home for the event; Shady Hill Records artist Sandra Piller (www.sandrapiller.com); Ohio-born country girl Kaela Gardner, who grew up singing in church and has recorded with Disney, Disney Radio, Saddleback Church, and Upscale Records; and Jim Huff, who has written songs with Joe Bonamassa, Holly Brook (performing as Skylar Grey), Franky Perez, and Louise Goffin. Scott McLaughlin will be featured on guitar.

Bach wrote one of Reba McEntire’s biggest hit songs, “The Last One to Know.” She also is the writer of hits for Jo Dee Messina, Ray Price and others. Frequently appearing in songwriter rounds all around the country, Bach will be the evening’s host as well as one of the performers.

Piller will perform numbers from her latest full album, “Days Like These,” and her 6-song EP, “Love Goes On,” which is dedicated to her late husband, Michael. “While it’s great to see fans of my music, it is so uplifting to see people who feel so close to Michael for all his great work,” Piller adds. “When Jane and I appear at Star Trek and Deep Space 9 conventions, the people who remember Michael with love just make my day.”

A strong supporter of the Nashville songwriter-in-the-round format, Bach says “You never know when you’ll be hearing a song that will become the next big hit.” The Other Door event will follow the classic format of the round, with all songwriters on stage at the same time. A writer plays one of their songs, followed by the next writer, and the next, and so on. “The camaraderie and sharing is a delight to watch,” Piller notes.