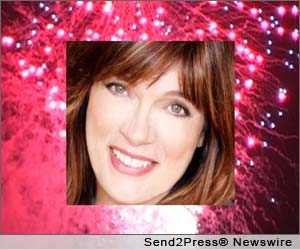 LOS ANGELES, Calif., June 6, 2013 (SEND2PRESS NEWSWIRE) — The moon shines brighter and the sparks really fly in the latest music video from country artist Sandra Piller. “When the Lights Go Out,” a song written by Jane Bach, Kelly Fitzgerald and Piller, celebrates the magic that occurs between lovers when they’re alone and they turn down the artificial illumination to make some sparks of their own.

“I love the images of the moon and the fireworks in this video,” Piller states. “I think everyone who’s ever been in love will feel the same way.” Most of the video displays various artistic renderings of hearts while the lyrics of the song fly into view.

The song appears on Piller’s recent EP, “Love Goes On,” which the singer has dedicated to the memory of her late husband, Michael, a man fondly remembered for his scripts and production of 356 episodes of “Star Trek: Deep Space Nine,” “Star Trek: The Next Generation,” and “Star Trek: Voyager,” as well as the screenplay to the motion picture, “Star Trek: Insurrection.”

A fan of country stars like Reba McEntire, Crystal Gayle, Patsy Cline and Kenny Rogers, it was the music of The Judds that inspired her to sing. “Country music is about genuine emotion for the joys of being alive,” says Piller, who embraces songs that communicate directly.

Raised in Southern California, she has the vocal talent and life experiences of a Nashville veteran. “I was brought up in the city, but I must have picked up my Mom’s southern accent because people thought I sounded ‘country.’ Plus, I really enjoy the storytelling aspect of those songs.”

Sandra Piller is on Shady Hill Records (www.shadyhillrecords.com) and more information about her music is available there as well as on her own web site (www.sandrapiller.com) and her Facebook and Google+ pages.

Next up on Indiegogo: Graphic Tools for the Average Joe
How to Minimize Risks During Major Surgeries