LOS ANGELES, Calif., July 8, 2013 (SEND2PRESS NEWSWIRE) — Country music singer Sandra Piller will appear alongside stars of classic motion pictures, television, and hit records at The Hollywood Show in Los Angeles. Recognized as one of the world’s most celebrated autograph and photo-opportunities for fans, the upcoming event will feature Shady Hill Records artist Sandra Piller on Saturday and Sunday, July 13 and 14. 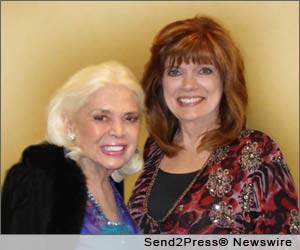 Sandra Piller (R) with her mom, actress Sandra Giles, at The Hollywood Show

The chart-topping recording artist will be appearing at a vendor table with her mother, actress Sandra Giles, whose credits include roles in “Columbo,” “Quincy, M.E.,” “Land of the Giants,” and many more.

“It is such a fun time at The Hollywood Show,” Piller says. “I get to meet fans of my music as well as fans of my late husband, Michael Piller.” As the writer and producer of several hundred episodes in the “Star Trek” film and television franchise, Michael Piller is fondly remembered by fans across the world.

“In addition to meeting lots of great people, it’s a treat to interact with stars we’ve seen in so many different movies and TV shows,” states Giles. The two Sandras are the first mother/daughter celebrities to be featured at The Hollywood Show. “We’re going to have photos, CDs, some of Michael’s ‘Star Trek’ memorabilia, and even some free give-aways at our table,” Piller notes, “so I hope you’ll stop by to say hello.”

Appearing at this edition of The Hollywood Show will be Debbie Reyonlds, Richard Chamberlain, Ron Perlman, Katey Sagal and dozens of other current and former stars of film and TV. Music stars at the show will include Marilyn McCoo, Billy Davis, Jr., Merilee Rush, Bo Donaldson, Omarosa, and songwriter P.F. Sloan.

For more information on Sandra Piller, please visit her online at www.sandrapiller.com

Video of Sandra Piller singing “When the Lights Go Out” —