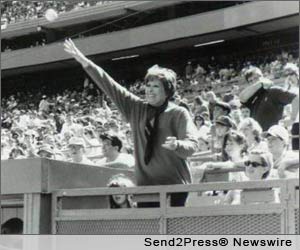 LOS ANGELES, Calif., Sept. 4, 2013 (SEND2PRESS NEWSWIRE) — On the second Monday of October, many states celebrate Columbus Day to commemorate the arrival of Christopher Columbus in the Americas on October 12, 1492. The event is also celebrated in 16 children’s songs on “Columbus Day Songs That Tickle Your Funny Bone” by Ruth Roberts. The songs have been newly digitized and made available on iTunes.

“While primarily aimed at children in kindergarten through the sixth grade, these sing-along songs are fun for the whole family,” notes Susan Nicoletti, Director of Operations for Goldenrod Music and Michael Brent Publications, the publishing companies that oversee Ruth Roberts’ songs. “We’re also finding that these collections of Ruth’s songs are very popular with special needs children as well as their parents and teachers,” Nicoletti added.

Songs on the album include “Columbus Sailed the Ocean Blue,” “World is Really Round, Round, Round,” and “Nina and the Pinta and the Santa Maria.”

“While many of Ruth Roberts’ tunes are often called ‘classic,’ we’re pleased to have them all available in digital format on iTunes along with the usual CD format available on the Ruth Roberts Music site,” says Nicoletti.

“Children love learning as they sing along with these funny and often pun-filled songs. Plus, they are all G-Rated,” Nicoletti states, referencing her five years as a member of the ratings board for the Motion Picture Association of America.

Using her facility for children’s music, she created several albums and miniature musicals of fun but educational songs. “Teachers and educators are continually rediscovering the many easy-to-stage musicals written by Ruth Roberts,” states Nicoletti.